number. First, in the same way as one is unaware of one's facial image without a reflective surface demonstrating it, so the mind also does not see itself and is thus fundamentally ignorant in that it is not directly aware of its own nature. Second, through this ignorance, the mind develops habitual tendencies of dualistic relativeness of a self and an other. Third, unaware in its ignorance and force of habits while confronted by these dualistic projections, the reaction of the mind is that of emotional affliction, producing bewilderment, aversion, and/ or attachment. Fourth, this emotional confusion produces accumulative karmic results that manifest in physical, verbal, and mental reactions which, in turn, further the karmic consequences of ignorance. Despite its having become deluded, this same mind has yet another quality. In its empty, clear, and unimpeded awareness, it has a primordial (or base) wisdom. This primordial wisdom, and the primordial consciousness, are indivisibly mixed together, resulting in the state of sentient beings. Yet, occasionally, in just the same way that the weather produces openings in a thickly clouded sky allowing shafts of sunlight to shine forth, the primordial wisdom (or buddha nature) will somehow shine through the veil of ignorance. At that moment, no matter on what level of existence, sentient beings will experience some kind of feeling of compassion, of faith, or of some altruistic motive. This feeling motivates sentient beings to perform virtuous acts. Such virtuous actions will cause a higher rebirth, which will allow for more opportunity with which to mature Buddhadharma. All of you who are coming in contact with this discourse have accumulated a great deal of positive karmic trends throughout many previous lifetimes. In these lifetimes, you have definitely developed faith in the Three jewels-Buddha, Dharma, and Sangha. You previously established a connection that is ripening in this lifetime. It is evident that this is true because you are someone who is naturally inclined to acts of virtue and you have an interest in the Dharma. This is a very great attainment. That is what is meant by the precious human existence, which is a special type of human existence that has a number of specific conditions. It is extremely difficult to obtain, due to the propensity of the ignorant to cling to ignorance. Thus, by doing that which continues to 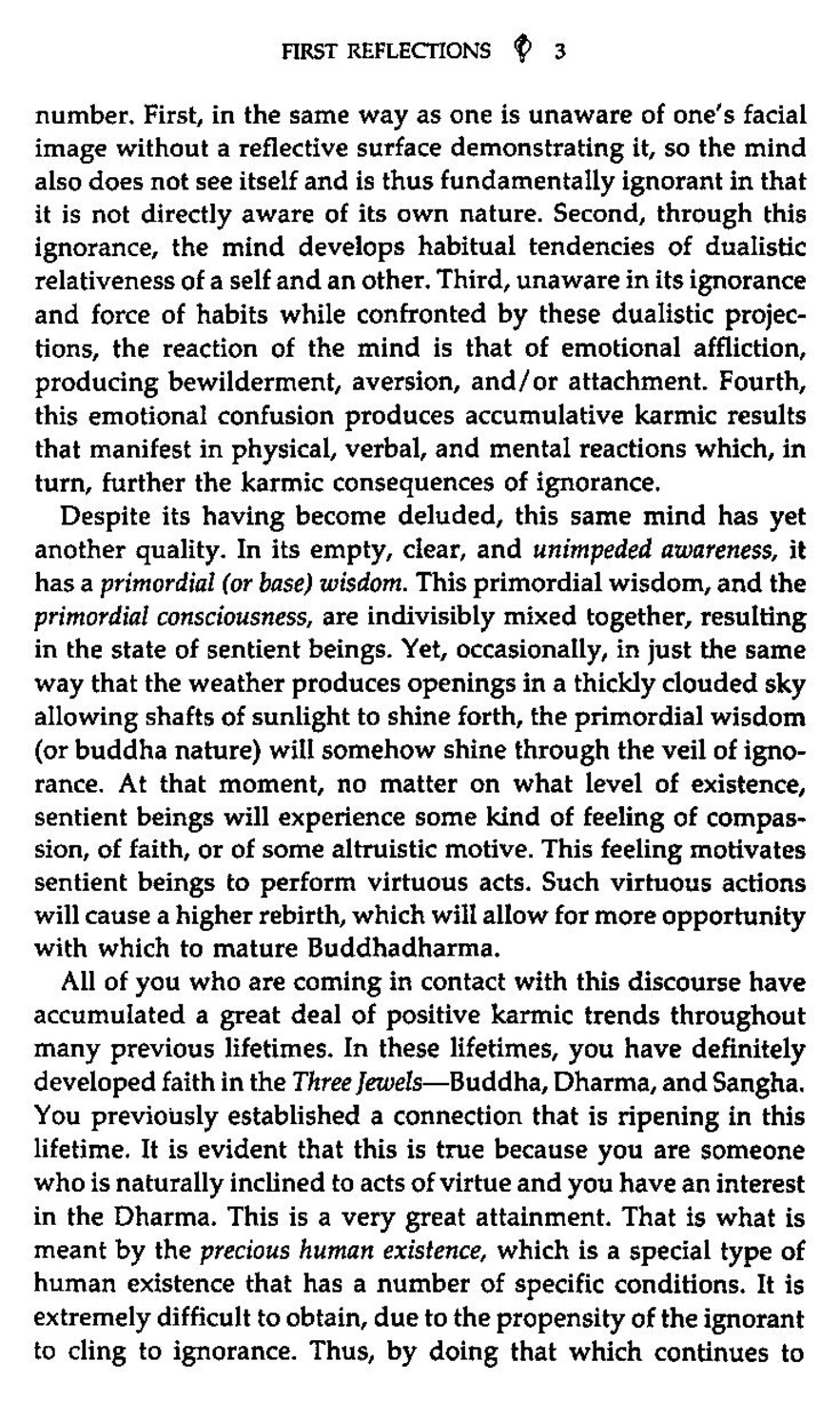